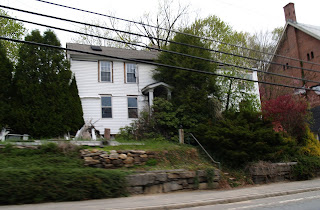 As time goes on in a small town many of the sights we see everyday become commonplace. They blend into the scenery without so much as a second glance. I am not referring to the pretty sights. I am referring to what planners in the 1960's called "blight".

Even in a small town, a town that thinks very highly of itself, blight can occur. Its onset is subtle, barely noticeable, then one day we see it for the first time, and ask, "Where the heck did that come from?".

There are a few places in town that have been forgotten. One such place may be a bit hard to find, or see during the day. If you travel Route 20 east, just past Route 131, look to your left into the woods beside the lake, and before you come to the motel. There, in the brush is a spotlight aiming straight up. It comes on at dusk, and goes off in the morning. At one time it lit up a sign there in the woods, but now it does nothing more than burn electricity. The sign is long gone. I am sure the power comes from the motel at the corner of New Boston Road, and the new owners haven't a clue to that 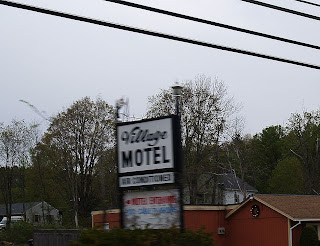 A more obvious piece of forgotten Sturbridge is the large motel sign beside the Chinese restaurant on Rt. 20. The Village Motel sign has been there for decades, but the motel is no longer used as a motel. It is a landmark in a way, but its job is done, and should be removed.

The saddest place is also on Route 20. A grand old house beside the Blackington Building has looked proudly over the Quinebaug for a very long time. A few years back the house was in the midst of a renovation, then all work stopped. It has been left barely completed for years. The overgrowth covers much of the debris spread around the property. I don't know the story behind the house, and why the renovations stopped. I am sure the folks that started it had the very best intentions, but something happened, and they were unable to complete the project. I doubt it will ever be completed.

The issue is now is not that the work was stopped, but the house is a hazard. Empty, with debris surrounding it, the old house is a target for vandals, not to mention fire.

Does the town have the ability to help? Would they if they did? I don't know. I am sure there has been some discussion with the owners over time, but it is time for either the renovation to continue, or the home to be razed. It just comes down to safety.

The house has so much going for it. The stone work along the front walk, and the old lamps show that it was well cared for at one time. I am sure the interior has many features worth saving.

So, what can the town do? Does it reach out to those involved? Does it back off while the owners figure out what they need to do? It's already been years. Do the owners still own the building? Does the bank, or the town own it for back taxes?

I do know there are other places in town that need some attention, too, but these examples come to mind easily since I travel Route 20 all the time. I am not passing judgment, but merely hoping to open some eyes a bit more.

Sometimes we need to look around us, and see through scenery to what lies beneath, and if something requires fixin', then we need to fix it. Small towns have always been good in this way. Ours shouldn't be any different.
Scribbled by Wally Hersee on Friday, May 09, 2008