Pranksters Run A Fowl Of The Authorities

When I was in high school I was given a choice. Actually, I was given a choice several times, but this time it was not choosing between home schooling or reform schooling. This time it was to choose whether or not to graduate in January, or in June. I had more than enough credits to graduate early, and leaving school would have been great, but it was my senior year. The last year. The last time I would be sharing memories with those kids I had spent every weekday with since first grade. No, I wanted to stay to the last second. I didn't want to miss a thing.

Our class was a very unique class. In some ways we were more mature than other classes, and we were responsible kids, too. We were also very creative. That was both a positive and a negative. Responsibility can be a relative term, and in the heads of 130 seventeen and eighteen year olds, we were very responsible.

Towards the end of the school year we began planning the Senior Prank. We wanted something that would be funny, harmless, and most of all, a memory. What we did is still talked about back home.

Here is how it went down.

I was, among other things, a student librarian. Great way to blow a study period, and roam the school unchecked. It was my job to get a hold of a master key to the school. I could have ripped off my fathers since he taught music at the school, but that would have been too obvious. I went for the librarians. Once we had the key, we made copies, and returned the original to its proper place. Next, came the actual planning.

Our school was like many built in the early 1960's. It had one level, and the class rooms formed a square around an open area or grass and trees. What could we put in that courtyard that would raise the smile quotient around the school? Then it was obvious. We knew exactly what to do.

One night, we approached the school around three in the morning. The double doors on the far side of the school were unlocked with the key, and opened. The alarm didn't sound since we had used the key. We placed heavy rubber mats onto the floor from the door, and across the hall to the other double door leading to the courtyard. Then we led in a three horses and a pony or two. The mats protected the floor from their hooves. See, we were responsible. Next, we threw in a couple of bales of hay and a large plastic bowl for water for the horses. Finally, we chained the doors shut that surrounded the area so the horses could not be removed till we removed them.

The following morning, as the kids settled into their homerooms, the school went bonkers. It was great. Teachers, the principal, the secretaries all staring out the windows at the horses frolicking in the courtyard, and they were laughing. Everyone was laughing.

After awhile, the principal came on the PA system and acknowledged the prank, and asked for those responsible to come forward with a key to open the locks we had placed on the doors.

After a bit, and as planned, a student with an airtight alibi presented the padlock key to the principal. The doors were unlocked, the horses were led out to their waiting trailers, and taken back home.

The prank was a prank. It violated school property. Was it right? Of course not. Pranks aren't gauged by whether they are right or wrong. They are judged by response. Ours had a great response, and no damage was done. The previous year a slew of car tires had been pulled up and over the flag pole. The tires went all the way to the top of the pole. They had to use a cutting torch to remove some of the lower ones, and removing the upper ones took hours of Fire Department time. Not good. The year before that the senior had somehow lifted a car up onto the roof of the school over the main entrance.

At graduation, our principal called us then "Fun Class", not just for the horse prank, but the Senior Sleep Over we had in the same courtyard. We had kept one key in reserve for just this occasion.

The horse prank has stayed in all of our memories all these years. No harm or damage was done. We did not become vagrants or burdens to society. For the most part, we succeeded in business, the military, as parents, foreign affairs, and in other careers we have followed. The Fun Class had a "culture" of sorts, and that culture guided our actions that night, and still does today. Be responsible, have fun, and do no harm. Yes, I know we did tresspass, and we did not respect the school, but we felt that the town needed to smile. We had lost two young men in Southeast Asia, and at least a dozen more on the roads in our small town. Somehow, in the scheme of things, we felt the smiles were long over due.

Early Monday morning some senior class member of the Tantasqua Class of 2008 were found attempting to pull a prank. They got caught. The prank, it seems, was to fill the pond in front of the high school,with inflatable pool toys and inflatable toy ducks.

Can you imagine the smiles that would have generated at the school if they had not been caught?

It was an attempt at a harmless and silly prank. Pranks can be destructive. This one wasn't. Yes, they were trespassing, and yes they were wrong, just as I was years ago, and they should be chastised, but don't eliminate them from the Senior activities to come before graduation. Mr Bliss, the principal at the school, has suspended the group for one week, and banned them from all Senior events. They will be allowed to graduate with their class, however.

This is to Mr. Bliss:

Go easy on them. Don't let a lapse of judgment, meant only to produce smiles, spoil the final memories they will have at the school. It is very apparent that these students care very much for their school, otherwise they could have chosen a different, possibly a harmful prank. Suspend them for a time, but let them participate in the end of year activities. Keep in mind, they feel that although the prank was wrong, it was just silly. If we all were punished for being silly at the wrong time, and place, I know I'd be doing life right now. If the prank had been in least bit destructive, I would be singing a different tune, but it wasn't.

Let the punishment fit the prank. 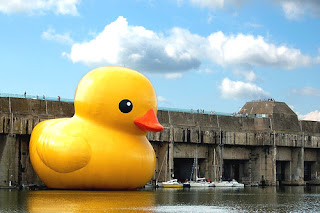 The memories they will carry for the rest of their lives of the times at Tantasqua will be fond memories. Memories of good times, and bad, good decisions and not so good ones. Let's leave some room for their final Tantasqua memories, too, after they complete their suspension.


One more thing, the Rubber Ducky Prank could have been a lot worse if they had put their minds to it. (see photo).

ed note: As this post was being written, the students received a reprieve. For more information click here.
Scribbled by Wally Hersee on Wednesday, May 21, 2008