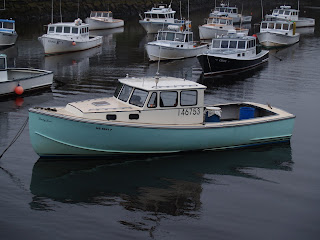 Since last week we've been in Ogunquit on what has become an annual pilgrimage to the sea.
Ogunquit, Maine was first settled around the same time Sturbridge was, in the early to mid 1600's, and that is only one of the several similarities the two towns share.

Ogunquit has been a tourist town for well over 100 years. People were traveling to the shore for few days away long before vacations were called vacations. The town had something to offer that only coastal villages can give: The ocean.

Well, that's a no-brainer, but it was dependant on what the other things the town had to offer that would decide whether, or not it would prosper during those summer months. The sea air, miles of sandy beaches, and no reason to move off ones butt other than to answer the dinner bell were good reason to come back year after year. Soon, inns, and guest houses sprung up along the shore, followed by hotels and motels, cabins and RV parks. The hundred years or so since the area was chosen by people as a get-a-way from everyday life it is still prospering.

There have been up and downs over time. I am sure that the each of the World Wars dampened the tourist season a bit, and the Depression didn't help in between those conflicts either. There were tourist booms, and busts. As more people came to the town, more homes were converted to guest homes. More hotels were built. Of course those tourist had to be fed. Restaurants sprung up, and more amenities like banks, and stores lined the main streets.

Today, the town of Ogunquit is a jewel. Lodging is everywhere. A room overlooking the ocean, up on the hill, or on Route 1 can be had most anytime with reservations, and which one you choose is only dependant on your budget.

The town offers a Trolley to haul tourists around the sights in town. The streets are welled marked and there is excellent signage all around town. You can't get lost.

The townspeople have a great deal of pride in the village. Businesses manicure their grounds to perfection and flower gardens are everywhere. The Marginal Way is a path that follows the lip of the ocean along the stone cliffs from town to Perkins Cove. Perkins Cove is a small piece of land with artists galleries, shops, restaurants and lobster boats tied up. Boat tours of the area can be had here, as well as fine pastry, seafood, jewelry, and art. The Town maintains the Marginal Way, and most of it is paved. One of this years project is to re-fence the path on the ocean side and the inland side where the motels, hotels, guest houses, and private residences are. After a bad storm in the early 1990's, the towns people volunteered to rebuild the pathway, and to restore the benches that were lost to the sea. A large stone monument was erected, and the names of all those that contributed are listed.

The village is loved by its residents.

Oh, restaurants have opened and failed, t-shirt shops are now in their 50th reincarnation, and those little tourist gift shops should erect sign reading "Over One Billion Sold" referring to those small cedar boxes that proclaim "I Love Granma --Ogunquit, Maine".

That's the way it is with tourist places. Seasonal businesses sometimes fold up and fade away, but others fill the void. The town makes it easy for new ones to come along. There are very few empty store fronts now, and probably won't be any in an other month.

Here in Sturbridge much of our focus is on tourists. We have the most lodging rooms for a single town west of Boston, including Worcester. We have conventions, the Pan-Mass Challenge, Old Sturbridge Village, our lakes, and woods, and our historic area to attract folks from out of town to us.

Why do some places seem to do very well, and weather the financial storms better than others? Comes down to experience, and everyone playing on the same team I guess.

I think that those in town that want to attract more business to town, to fine tune what we have now, and plan adequately for the future should go on a field trip or two. Hire a bus, load it up with committee members, make some reservations and hit places like Ogunquit, Chatham, Newburyport, Stockbridge, and Mystic.

Go on a fact finding mission. Take good notes and bring back a pocketful of inspiration to us. There are some great plans circulating out there already, and there's been some positive, and constructive talk, but sometimes all it takes to walk the walk is to meet someone on the road that has already been where you want to go.

Above photo: Lobster boats at Perkins Cove, Maine taken this weekend.
Scribbled by Wally Hersee on Monday, May 05, 2008