Associations Can Help, Or Hang Us 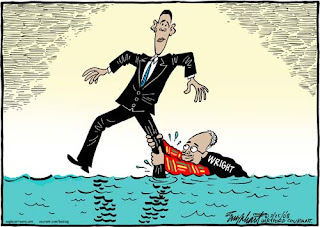 A number of years ago I was told that we are the sum total of the people we know, and the books we have read. I would also add, that the actions we perform speak even louder. It has long been said that we are judged by the company we keep. Businesses know this. Individuals also know this.

Barak Obama learned this lesson rather late in the game. Criticism of his relation to Reverend Wright caused him to rise up and defend not only himself, his church, but the Reverend. That was until it became quite clear that the Reverend is totally Looney Tunes. It was then that he spoke out against the words of his pastor, and made it clear that the reverends thoughts and ideas were not of is own.

It was a brave thing to do, but it was long overdue. Obama risked offending his fellow members of the church, and his old friend as well, but it had to be done. He could not move forward unless he set the record straight, and do it in such a way as to distance himself from those ideas of his pastor, but not to distance himself from his church. A tight wire act that he performed well.

All throughout our lives we experience situations like this. When we were much younger our mothers may have told us, "I don't want you playing with that Flevis boy. He's always in trouble, and I don't want you there with him".

We may have listened, maybe not, but she was most often right on the money. As we got older, and our circle of acquaintances and experiences grew, we began to heed those words on our own. We had to, we knew that we would not be at Westwood High School, or St. Peter Marian High for ever, but what we did there would certainly affect where we went from there. Our grades, our activities would all help us onto our next step. And, if by chance we were able to advance regardless of our poor actions, we were fortunate.

The same holds true for us as adults. We are judged by the company we keep, and by those that speak for us. We could have a stellar record, or maybe one that was seen by some as needing some improvement, either way, a spokesperson that lacks credibility, and is fighting on our behalf, will certainly hurt our reputations more than anything else.

Then, there is another scenario. Maybe the person speaking on our behalf is not doing so for the obvious reason, to help us. Maybe, they are using it as the back road to attack others. Others that they obviously have had it in for for a long time, and this gives them an avenue. A warped avenue at best, and suddenly, we are in the middle.

It is the adult version of the game we played as kids when we latched onto someone just to piss off someone else.

The good thing is most of us can see through it. As adults we have grown, but childhood games are still familiar, and when they are played, we can spot them like rice on coal. The ones that believe they can pull one over on us lose more credibility, and thus hurt those they have chosen to support even more by their behavior.

At first, a few words of support are appreciated, but after a time, when the words drone on and on, day after day and take on less of a supportive role, and more of an attack role, we need to pull an Obama.

Otherwise, we will be judged by the company we keep, and once that has begun there is little we can do to change it.

Comments are now closed on this post.
Scribbled by Wally Hersee on Saturday, August 09, 2008