Time For A Roadtrip 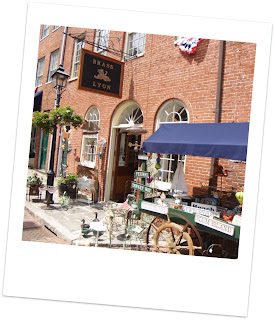 This past Sunday we headed northeast to Newburyport. It's been too many years since I visited Plum Island, and to tell the truth, I have never been to Newburyport.

That was a mistake.
The town is beautiful. Old brick buildings line the main streets and along the waterfront. There are shops of every description. Antiques, maritime curiosities, books, art galleries, and restaurants by the score.

The sidewalks are brick, and the street lights reflect the period lighting of the late 18th, early 19th century. There is a great boardwalk along the waters edge with a wonderful view of the harbor area. Boats tie up there, and we were fortunate enough to go aboard a Coast Guard ship in town that day that was open to the public. 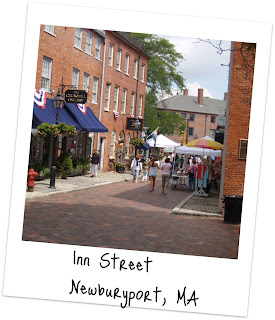 Downtown, at the intersection of three main roads there were vendors set up and selling all sorts of food. A small covered stage offered the live music of an a cappella mens group, Overboard, who were superb.

Along Inn Street, an area renewed in the 1970's with old shops, and a small park off the Main Street, we grabbed a sausage sub from a cart and sat in the shade of an old tree. We watched the families along the small brick street, and playing wiht their children in the small shaded playground. The music from the a cappella group could still be heard not far away. It was beyond peaceful, and very relaxing.
Little did we know that this past weekend was the end of a nine day celebration in Newburyport, Yankee Homecoming. I spoke with a nice lady at the information booth near on the main street near the water and she told me that the Homecoming had been going on for 50 years, and everyone that was born, or raised in Newburyport comes back home during that time to celebrate. It's a nine day long celebration. 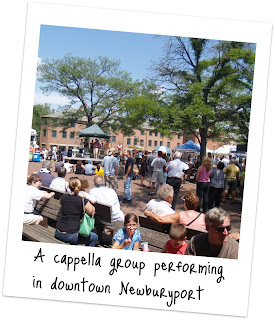 My kind of party.
There was all sorts of entertainment, shows, exhibits, even a three hour long parade. We missed the parade because we had no clue it was going on, and the sky opened up with a heavy rain, so we headed out of town for Plum Island.
The rain worsened, but after a few minutes of standing out in it, and watching the waves, we headed back to town. We stopped a the new National Fish & Wildlife Refuge Visitors Center, and the new Audubon Visitors Center across the street. Both were a great place to duck out of the rain,and a a nice place to learn more about the area. Once back in town we had a great lunch at the Starboard Galley. The rain had chased everyone inside, so getting a table with a view of the harbor was impossible, but our table had a great view of the 50 inch wide screen TV and the Red Sox game. This view was great, too.

Newburyport is not only a pretty town , one that is obviously loved by her citizens, it is a well cared for historic town that attracts a boat load of visitors daily.
The Chamber of Commerce page is awesome. Up to date and filled with information. Seems that all the businesses in t 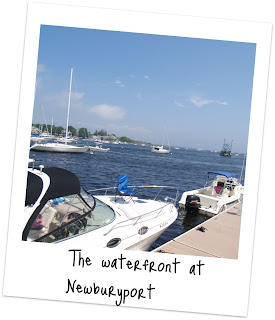 he town are on board to make the town a success, and the town fathers are right there as well.

Sure, there are growing pains, a few new chain stores have come to the down town like Talbots, and a hotel is going to be built on the waterfront. Some of the townsfolk are a little worried about change.
Sounds familiar.
Anyway, Newburyport, Massachusetts is doing something right, as are many other tourist areas in the Commonwealth. We can learn so much from these places.
I think it's time for a field trip.