A Most Amazing Thing 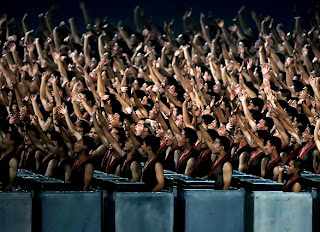 We sat on the couch in front of our TV for hours watching what will go down as the most incredible, and happy, televised event in history: the opening ceremony at the Olympics in Beijing.

We were awe struck.

I won't take up any space here trying to describe what we experienced, but it is not for lack of wanting to. It's like, where do I begin? It is easier for me to tell you to go to http://www.nbc.com/ and view it for yourself.

If something as benign as 2500 Chinese drummers moving simultaneously, and perfectly, as was demonstrated at the opening ceremony, can rivet the eyes of the world just imagine what is in store from that country over the next 10 years without their drums.

The world has been changing, but until Friday night most of us had paid little attention.

Last night we not only witnessed history being made, but the future being promised. 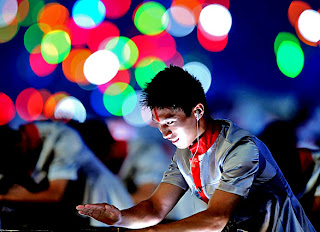 And this happy fella to the left?

He's beating the drum for his countries March into the Future, and this time, it won't be a Long March.


Click on the photos above for a slide show courtesy of the NY Times.
Scribbled by Wally Hersee on Sunday, August 10, 2008