History and Sturbridge go hand in hand. When one mentions they are from Sturbridge the response we usually hear is, "Oh, Old Sturbridge Village". Yes, that, too, but we are a village of our own as well.

When we think "history" we often drift to muskets, horse drawn carriages, butter churns, and candle light. We have more, much more.

Ever think what life was like in these parts in 1929? 1938? 1943, or 1957? Recent history, and our towns response to the world around them was not far off from the rest of the country in those times. The Depression brought New Deal workers to town that worked in Civilian Conservation Camps, and researched our old buildings. World War Two came and many of our young went overseas. Some did not come home. The Army took over the Publick House, and trained the State Guard in the tactics of what could now be called guerrilla warfare, and drilled on the Common.

In the 1950's, new cars, new music, and a new two term president were just a bit of what the town experienced with the rest of the country.

As the times changed, our culture changed. We experienced the same as Hoboken, DeMoines, and Seattle. We cruised the town in our Chevy's, hung out at the drive-in, and rocked to Chuck Berry, the Coasters, and Jerry Lee Lewis.

The photo above is a postcard of that era. Ovides restaurant was the place to go to back then. For a small town, it offered a lot, as the neon sign on the roof declares.

It's hard to think that the years in our life time as history. They are. I studied them in school, and children are studying my life time now. Learning history is important, and saving history for the future is just as important. Old photos, letters, and recollections are invaluable to us as a town. If you know someone that has lived in town for some time, talk to them, and learn about who we were. Better yet, turn on the video camera and record the stories for our children.

Recording our past is a wonderful thing, but we mustn't overlook the recent past. We may have lived it, but to our children, and theirs, it is as strange as the Depression is to me.

Next time your are rummaging around in the cellar, or up in the attic, look for little bits of Sturbridge, and if you find any, share them.

Besides having an "Old Village", we are also an old town, and preserving our past is not only our responsibility, but our children's heritage. 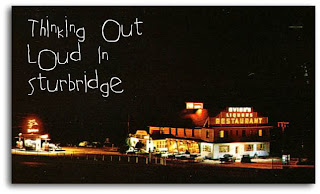