Everyone Has A Spare 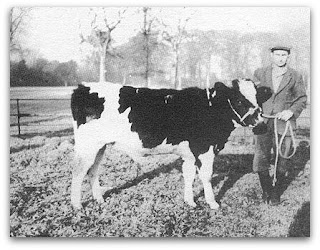 From time to time I like to share a bit of humor from rural Massachusetts. --ed.
Two farmers from deep in Central Mass were talking one morning. Ephus turned to his friend, Rowley, and said, "Ephus, every year you win the blue ribbon at the fair for your fine lookin' Jerseys, and every year Milard Fleek starts up a few months before and rips you and your cows apart down at the Grange. He spreads all sorts of things. Says you feed them steroids, and send them to a spa the day before the show. How come you don't go down there and pop him one?"

Ephus stood quietly for a moment, then looked up at his friend and said, "Years ago my mother told me something. See, I was always gettin' my lunch pail taken away from me at school. Always by the same bully, Butch."

"I remember him! He was a piece of work, he was", said Rowley, his eyes all big with anticipation of the rest of the story.

"Well", continued Ephus, "One day I went home, and mother saw that I had been crying. I told her what had been going on, since second grade, doncha know, and she told me something I have always remembered to this day."

"What's that, Ephus? She tell you to go whip him, whip him good?". Rowley was getting more excited to hear the words Ephus's mother had bestowed upon him.

"No, she told me the Good Lord gave everyone on the Earth one ***hole, and in my case, the Lord must have thought I was special because he gave me one I carry around with me, and a spare one at school. I guess I am still lucky guy, 'cuz now I got one down at the Grange, too."

Both men looked at each other without expression for a second or two, then broke into laughter that could be heard all the way to Milard Fleeks barn.