Forest Gump Said It Even Better 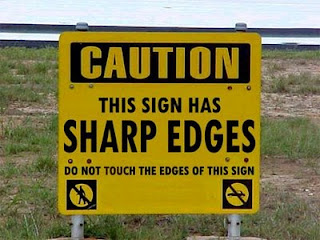 Just when does stupid start? Does it follow along with the rest of the natural stages of Growth & Development, or is it something that is learned?

If a 2 year old walks into a screen on a sliding glass door we might laugh at their reaction, and then console them after they bounced back into the room. If the same kid does it again, and again, and is still bouncing back into the room when they are seventeen, one might start to wonder just when the stupid started.

Kids learn that things can hurt, and they learn real quick not get hurt twice.

Well, most of them do.

In a kids eyes, they are invincible, so falling off the garage roof when their skateboard wheel gets caught in the gutter can be understood to a point. It's when it happens again the following day that they earn the right to wear the "Stupid" t-shirt. This is called "Defying Experience".

So, just when does stupid start? If a kid does something he knows may cost him some emergency room time , and he does it in front of grownups, is he stupid? Are the adults that allowed it to happen stupid?

Accidents happen. They just do, but there is a line between an accident occurring, and an act of stupidity. It is different when a kid is ten years old, than when he is sixteen or seventeen. A sixteen year old is more experienced than a ten year old. He may not always be smarter, but experience should count for something. It is also different when a stupid adult is responsible for someone getting hurt. Then it is the other adults that are present that are equally responsible for not intervening.

When the ten year old touches his tongue to the flag pole in January, it's an accident. He may have no experience in what frozen metal can do to body parts. No real idea what could happen. And, having a suspicion of what may happen doesn't really count.

Now, if you find a sixteen year olds tongue stuck to flagpole in January, it's stupid, and if that particular kid did in the presence of adults, it's still stupid, but the adults are not to blame. They aren't accomplices in the act. They didn't stick their tongues on the flag pole. A fifteen year old knows better. A thirty-two old knows better.

There are many things that grown-ups do that set both good and bad examples for all ages. Fact of life. There are also many accidents that can occur when kids watch and learn this behavior, but there is also the Stupid Factor that has to be accounted for as well, and that factor is shared by both grown-ups and children.

The best grown-ups can hope for is that kids will learn what is right and safe. It's an adults job to teach those traits either by example or exposure.

Of course, a kid can learn stupid from a grown-up, too. Can't help that either.

I guess, in the end, when an incident occurs, and it results in an injury, don't be too quick to point the finger at others in area. Oh, there may be accomplices holding the ladder while the lad pokes the bee hive with a stick, but for the most part when a teenager has a foolish accident, then you can't rule out that the Stupid Factor wasn't an accomplice. Being in the wrong place, at the wrong time contributes a lot as well.

Focus on the incident, not on the peripherals unless the road takes you there. Assume nothing.

And, when an accident happens, don't start pointing your finger at who else is to blame. Hands are better used to help the victim, and pray for their recovery.
Scribbled by Wally Hersee on Sunday, July 13, 2008