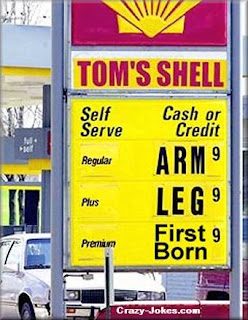 Not much one can do about lowering the price, but conserving what one does buy can be done. It's not an easy thing though. I've been told that it takes 30 days to fully form a new habit. Probably takes longer to break one, but I have been trying to change my ways.

When I first started to drive, back in the early '70's ( I was 4 years old), the least expensive gas was sold at a place on Route 109 in Westwood/Walpole/Dover area at Maiders Gas Station.

1971, not not 1938. The rest of the gas stations were only 2-3 cents more, but when you are only making $2.00 an hour, and $5.00 worth of gas would last forever, so it was worth the ride to Maiders. Problem was I worked at the Sunoco Station three miles west of Maiders. The owners seldom saw me gas up at work. Money was tight for a teenager living on his own, and gas was too important to skimp on. Sometimes, after I closed up, and turned the pumps off at 9:00 PM, I'd drive my 1963 Malibu SS convertible to each of the pumps and drain off the bit of gas left in the hoses right into my gas tank.

So, like many of you, gasoline and I go back a ways. The gas crisis's that occurred later are more than familiar, but like everything else, times change, prices inch up, salaries rise and one day your complacency gets the best of you, and --Surprise!!

We love to take drives around the area. Exploring new roads, stopping at new places. For me, it is therapy . Drop the top, and let the wind blow the week out of my head. It has become an expensive therapy, but still so necessary. A couple of weeks ago Mary and I discovered Westview Farm in Monson. Everyone else knows about it, but the view it offers, and the ice cream were brand new to us. It was a lot of fun eating ice cream, watching the little goats horse around in their pen, and while the sun went down. Worth every penny of gas. We don't take the drives as often now. A lot less often.

My commute is exactly 60.5 miles from my driveway to my parking spot at work. My truck gets about 18 miles per gallon on a good day. I work full time, but thank goodness it is only three 12 hour days a week, with an occasional fourth thrown in for exhaustion.

You get the picture.

And, if I want to drive to Shaws, well it is that much more.

The obvious question is, "Hey, Knucklehead, why are you driving a tank to Boston?" Well, remember three years ago the auto manufacturers were sharply discounting their vehicles with 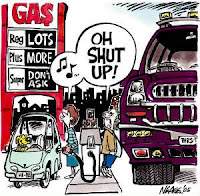 "Employee Pricing"? Well, I bit, and saved a boat load of money, but there was an ultimate price to pay. My Sebring was paid for, but I always wanted a full size truck. Never know, I may have to haul something. I signed papers, and 3 days later, gas prices went to $3.00 per gallon.

Nobody wants a big vehicle today, so trading it in would be difficult, and selling it privately would be hard as well. I have to eat it. [ Subliminal message: 2005 Ford Kings Ranch with saddle leather interior, and all the goodies. The stereo is sweet. Make an offer.]


I guess changing ones behavior is the best way one can fight back. That, and scaling down the size of ones vehicle. Commutes are more difficult to change for most of us. We go where the work is.


Like heating our homes, the behaviors that we have settled for for some time regarding our driving needs to change as well. You know all the tips. It will be challenge to change.

I wonder how Mopeds handle in the snow?