In comic strips there are things called "thought balloons". Those puffy cloud like things over a characters head with their thoughts written in them. They most often hold the punch line.

Well, I guess now I can, in a cute, soft, but effective , point making way. There are these little refrigerator magnets and posters sold online that are great substitutes for our "thought bubbles". Each of these little things has a smiling bunny on it with a to-the-point statement.

They serve a need.

Ever have a conversation with someone and walk away shaking your head? Well, you can feel better if you slap one of these "crazy doesn't begin to cover it" on the rear end of their car. Won't make what was said any clearer, and the point you were trying to make will never be known by them, but at least the thought you had as you walked away can be shared by others. A lot can be said about being satisfied.

Annoying people can be handled the same way. Now, I have to admit, 99.9% of the human race doesn't bother me. 0.1% does. Live and let live. They are just dancing to different salsa. But, every once and awhile one of those 0.1% comes along and annoys the hell out of me. I used to think it was a test. God's way of testing my patience and desire to stay out of prison, but I know differently now. Annoying people come with the territory, like mold on a shower curtain. Now matter what you do, they come back.

If I was more egocentric than I already am by having this blog thing, I would like this one as a tattoo, but I am not that bad. Really. I do know some people that are, though. A "joke gift" t-shirt with this one printed on it would make me feel good, and they'd never get true meaning, or would they?

I would like to keep this one for myself.

Then there are times when no matter what you say, write or do, it just doesn't make a bit of difference to some people. They will always take things out of context, half read a sentence, hear and not listen, name call, and make silly accusations, and think with their mouths. It is natures way. Look at the presidential race. Not much we can do about it. They'll ramble on, and on in the hopes that all those words will counter your thoughts or opinions. Like throwing sand on a campfire, they try to smother you, and your ideas. Compromise is something they have never experienced, and playing well with others is still something they cannot do.

So how does one deal with people like this? How have I dealt with them? Well, first of all I pick my battles, and know I can't win them all. I try to express myself, and listen to them as well. I mean really listen. And, in the end, if nothing I have done, said, or written makes a difference, a "thought balloon" goes up... 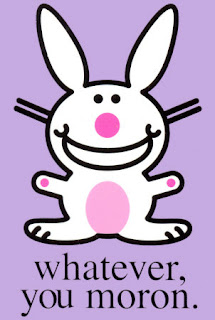