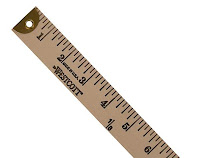 The measure of a person is set by their actions, words, and ultimately, their legacy. Of course, their legacy is formed by those actions and words they did and spoke during their lifetime. The legacy thing is something we strive for, but would like to wait on a just a bit. A long wait would be best.

It's all fairly simple, really. Nothing complicated here.

Danny Thomas, the late actor, has a wonderful legacy. He built the St. Judes Hospital for Children, and worked to support it all his life. His story is worth reading. Tom Yawkey is another person whose legacy includes the continual work he did for the Jimmy Fund in Boston. These men gave of themselves to a charity that was far greater than themselves.
Today, other well know people are involved in all manner of foundations and charities around the world, lending their name, time, and reputation to something bigger than they are.

The Lance Armstrong Foundation, The Michael J. Fox Foundation for Parkinson's Research, The Larry King Cardiac Foundation, Joe Kennedy's Citizen Energy, Mary Tyler Moore's support for the Juvenile Diabetes Foundation, Paul Newman and Julia Roberts support the Hole in the Wall Gang Fund are just a few of the examples of people with excellent reputations founding, supporting, and being spokespeople for charities and foundations that benefit all of us.

The character and integrity of the people involved with a particular organization speaks so much about that organization. Positive, and decent people inflict a positive reflection on the people and things they are associated with.

Another no brainer, and this why organizations, and charities seek out those among us, that are an example to others, to represent their organization.

And, then there are those organizations that were started with an excellent idea, and purpose, but their founders, and/or public spokespeople have absolutely no credibility in the community. It'll be tough going for them. People associate personalities with organizations they are linked to. If the spokesperson is a bit of a dweeb it will not help the organization one iota in raising funds. In fact, it will most likely hurt the good intentions of the organization a great deal.

One can overlook the spokesperson of an organization, and donate to their cause on its shear merit alone, but that will work for only some. We can hope that the others in the organization will see things as they are, and make changes if they want to succeed, and distance themselves from the distraction. If they don't, then it is only common sense that they really don't have their heart in what they are doing, and success is not that important to them. Or, they really have no say. I tend to believe the latter is true in most cases, and that will ultimately come back to haunt them.

Sadly, that is not a good thing.

It has been three days since this article was posted and comments are now closed.