"OK, Rocky, C'mon out! We Got Ya Surrounded By Selectmen!" 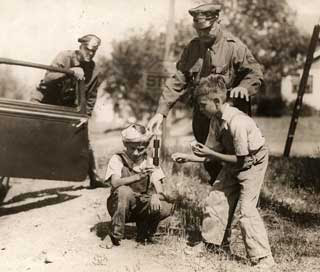 Caught in the act!

These boys were caught in the act of playing with fireworks by the Minnesotan police in this 1934 press photo.

This what the police do. They keep the peace, and keep us safe, and both duties were captured by this old photo. The photo was probably staged for the newspaper, but the point it makes is still important: This is what police do.

Now, if those officers from 74 years ago investigated some noise, or fireworks and found nobody there, they'd probably do what would be done today: make a note, add it to the shift report, and keep an eye peeled. If they caught the rascals then I am sure they would give them a stern lecture and then turn them over to their Ma and Pa. It would be like sitting on Death Row for those kids as they rode home in the cruiser to their unsuspecting parents. Now, if there was something more that had happened, like a rocket sailing through Ol' lady Feebis's window and blowing her canary to Kingdom Come, then I imagine there would be an investigation. Same as today.

That's what police do, they investigate stuff. It's part of keeping the peace, and keeping us safe. They do it very well.

Investigating things is something the milkman doesn't do very well, or the alderman, or the mayor for that matter.

Here in town we are fortunate to have a top shelf police department. They know how to investigate things. And, we also have a State Police Barracks right smack in the middle of town. They know all about this investigation thing, and how it works, too.

Still, some folks would rather have the Fence Viewer, or a selectman be responsible for investigations.

Kinda silly, really. Ain't a selectman's job. In fact, if a selectman did stick their nose into an active investigation above and beyond what would be considered his duties, I am sure the police may want to review their job descriptions with that selectman.

Nope. Ain't a selectman's job at all.

Maybe, if one was worried that an investigation was slow in moving, or not yielding the information one would expect, then maybe, one would ask those in charge of investigations, the police.

Comments are now closed on this post. They can still be viewed--ed.
Scribbled by Wally Hersee on Sunday, July 20, 2008