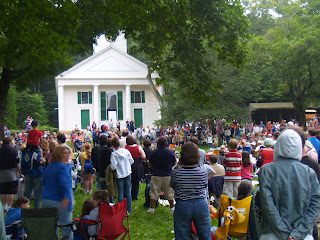 If I had only heard it once I would have smiled and nodded in agreement, but I heard it twice, and from two different sources.

That is how the Fourth of July celebration at Old Sturbridge Village was described by two young men last evening. I haven't used that phrase since 1971. It was more than appropriate though.

The day long celebration was the brain child of James Donahue on July 5th of last year, the day after he took over the reigns at OSV.

I met Mr. Donahue on the road from the visitors center to the Meeting House, and interrupted his conversation to introduce myself, and to thank him. It was then he told me that it was his one year anniversary at OSV, and it was the next day after arriving that he envisioned the July Fourth Celebration. Well done.

The Village was packed. The tickets for the event were sold out, and parking had to extend onto grass out near Stallion Hill Road. The event was well planned out. There were OSV employees everywhere to answer questions and to offer directions. Many in their OSV Polo shirts, and many others in the their 1830's attire. It was if a tear had occurred in the time space continuum. The 21st century mixing with the 18th.

There was music on the Common, a magician, a juggler, a pie eating contest, and lots of food available to all. A sign read. "Steamers and Ale" on a wall of a building as you walked from the parking lot to the visitors center.

The crowd was kept in line by signs and temporary fences around parts of the Village, and a great viewing area had been set up for the fireworks down by the farm houses.

The employees and volunteers at the Village seemed genuinely happy we were all there. This new event for the Village showed just what they could do, and they were proud to show it off.

I overheard many conversations, and people came from all over the state to see the fireworks, and the general feeling was that this was long overdue. I agree.

The fireworks were absolutely great! I figured there would be a few minutes worth, due to the cost, but there was well over a half hour of explosions. The viewing area was perfect. This is an example of how an institution can find itself again. A new leader with fresh ideas, a motivated staff, and a strong willingness to succeed is all it took.

Judging from the size of the crowd last night, and how they all enjoyed everything offered during the celebration, I am sure this will be an annual event.