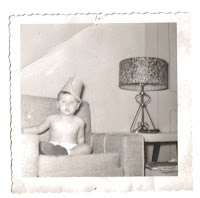 The photo to the left was taken of me this past May, before the wedding. It's amazing how fast we grow up when responsibility is knocking at the door.

Then, some of us never do fully grow up. You can tell who they are. They are the ones that think the world around them is one big sandbox in the playground. They saunter around the as if they are the "King of the Hill". They do an awful lot of yelling, too. Sometimes for no real reason other than to hear themselves. This is so familiar.

Name calling is another tactic these "kids" still do. You would think they would have learned that they are glue, and the rest of the world is rubber by now. They start off slow, and kinda quiet like, "Hey, stupid." And when nobody pays any attention, they ramp it up a bit, "Stupid Face!". And, then there is the Rapid Double Name tactic, "Stupid Face Jerk". The 'jerk" added for emphasis, and for lack of anything better to say in a moments notice. These "kids" don't think well on their feet.

One of the best things they do is run around the "playground" all day, calling names, irritating others, including grown ups, and when they get smacked by someone else, and called a "baby" or worse, they amp it up really loud and try to tell everyone within range that so and so is calling them names!

What's up with that?

They didn't learn years ago that whining is like an engraved invitation for further smack downs? It's like wearing a sign around their neck, "Beatings Accepted Here For Free All Day".

When they run up against someone tougher they will start saying things like, "That kid eats bugs 'cuz I never see any bugs around him, so I know he eats them". Shock factor, and inference. Hey, the Enquirer has been doing it for years, it works. But, soon, credibility is long gone. The "kid" launched it off the teeter-totter during his last tantrum. It's history.

Then where does he go? Sometimes they realize that they may have overstepped, and will look for a quick fix to get them back in everyones good graces.

"Mom! I emptied the trash, and washed the dog, and detailed your car, and changed the baby , spayed the cat, watered the grass, fed the homeless, and did my homework. Can I go out now?"

They do have a great way of making up for being a brat, don't they? We smile, and forget that they pushed the Deacon down the stairs last Sunday. You gotta love 'em.

Naw, not really. We're the grownups. We know how they work. We can see through these Peter Pan wannabe's. They're still irritating as all hell.

But, they live among us. Not much we can do.

So, getting back to that photo sitting up there. Yep, that's me. Just a few years ago. Physically, I've changed. Taller, heavier and hairier now. Still have the bucket on my head most of the time. See, I am one of those people that still acts like a kid. Always have been. Helps in my career, and helps in life.

The difference is I know when to turn it on, and off. Being a grown up taught me that.
Scribbled by Wally Hersee on Wednesday, July 30, 2008