The following story is the second in a continuing series of Sturbridge Stories. This particular story is not well known. It tells us of the character of the Sturbridge citizens, and their willingness to speak their mind, and hold true to their beliefs, even in a public forum. Only one sentence was spoken, but what was brought to that particular forum by the individual was the respect that others in the town had for him, and that one sentence was all that was needed to be said.
Obviously, there is a lesson for all of us in this story, and it does not have as much to do with patriotism as it does for respect, and with that respect, comes certain rewards. Rewards like others listening and hearing your words, and thinking that much of what you have said to share them.

The weather on this day was typical for November, not the kind of day one would like to ride in an open carriage on. The election polls were held at the Sturbridge Town Hall, and the voters response that day was good. It was the presidential election, and we were at war.

On this particular day Deacon John Phillips, and his son rode to the Town Hall to cast their votes. Deacon Phillips was 104 years old. He had served as a soldier during the Revolutionary War, and after the war, had gone on to serve three terms as the State Representative for the area. He had also held other positions within the town.

Local historian of the time, Levi B. Chase, described him as "...a man of large frame, and a long strong, and intelligent physiognomy". He was a well respected man.

His son pulled their carriage up outside the town hall, and he assisted his father down from his seat, and together they walked into the Town Hall to vote in this important election. The weather, nor his years, kept him from his duty. This was the kind of man he was.

The following letter describes what happened next.

I send you, with this, a pamphlet of "The Centenarian, Deacon John Phillips -- of the celebration of his One Hundredth birth day: And am happy to inform you that he still lives, now in his 105th year. He is a Democrat, of the Jeffersonian School; voted for Washington, as President of the United States; and, yesterday, voted for your re-election to this honorable and responsible place. He rode from home, two miles, to our Town Hall, with his son, Col. Edwd Phillips, aged 79 yrs., to cast his vote. He entered it between two unfurled flags of his country, bearing on them the Stars and Stripes; all within, at the time rising, with uncovered heads to do him homage. And when offered two votes, 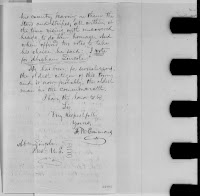 to take his choice, he said: "I vote for Abraham Lincoln." He has been, for several years, the oldest citizen of this town; and is now, probably, the oldest man in the commonwealth.

I have the honor to be,
Sir,
Very Respectfully Yours.

F. W. Emmons
What the letter does not tell of was after Deacon Phillips voiced his intention to vote for President Lincoln in a "voice audible throughout the hall", he then requested all soldiers that had served, or were currently serving their country to present themselves in a row in front of him. He then went to each of them, introduced himself, and shook their hands.

This simple moment in time, with few words spoken, made such an impression on those that were in attendance that he Town of Sturbridge resolved to record the event in the Town Records.

"Whereas our very venerable and highly respected fellow citizen Deacon John Phillips, who is this day one hundred and four years, four months, and nine days old, and who still retains his mental and physical faculties in a high degree, and, whereas, he has traveled some two miles to attend this town meeting and has deposited his ballot for Presidential Electors and State officers. Therefore, resolved: That this be entered into the records of the town as a lasting memorial of his undying patriotism, and devotion to his country, and as an incident perhaps unparalleled in the annals of our government."

, the above letter sent to President Lincoln did garner a response.

I have heard of the incident at the polls in your town, in which you bore so honored a part, and I take the liberty of writing to you to express my personal gratitude for the compliment paid me by the suffrage of a citizen so hon venerable. The example of such devotion to civic duties in one whose days have already extended an average life time beyond the Psalmist's limit, cannot but be valuable and fruitful. It is not for myself only, but for the Country which you have in your sphere served so long and so well, that I thank you.

Your friend and Servant

Tip: Click on the above photos for a larger view.

References: The Quinebaug Historical Society Leaflets Volume I, No. 25 Sturbridge in the Civil War by Hon. Alvin B. Chamberlain pp. 305-317

The Library of Congress http://memory.loc.gov/cgi-bin/ampage?collId=mal&fileName=mal2/431/4314900/malpage.db