The following description of our town is from Nason and Varney's Massachusetts Gazetteer 1890. 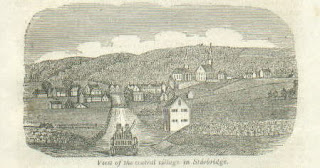 Sturbridge is a thriving agricultural and manufacturing town of about 1,980 inhabitants, situated in the southwestern part of Worcester County, 60 miles from Boston. It is reached most nearly by the Southbridge Branch of the New York and New England Railroad, and readily also from Palmer, on the Boston and Albany Railroad. Brookfield forms its boundary on the north, Charlton on the east, Southbridge on the southeast, Holland and Brimfield on the west, and Union and Woodstock, in Connecticut, on the south.

The 145 farms in the town were reported in the recent census as yielding in 1885 products valued in the aggregate at $125,152. The principal manufacturers were the Sturbridge Cotton-Mill Company, employing in June, 1885, 286 persons; and the Snell Manufacturing Company, making augers and bits, and employing 50 men. Other manufactures were boots and shoes, carriages, wooden goods, clothing, beverages, soap, medicines and food preparations. The value of all goods made was $384,787. The number of legal voters was 415, and of dwelling-houses, 345. The valuation in 1888 was $975,107, with a tax-rate of $13 on $1,000. There are a good townhouse, a public library of about 3,000 volumes, and 13 public schoolhouses; the latter valued at $22,000. The churches are one each of the Baptists, Congregationalists and Unitarians.

The post-offices are Sturbridge (centre) and Fiskdale. The other villages are Snellville and Westville. Sturbridge village lies in a basin among the hills, and so embowered in foliage during the summer that only glimpses of its roofs and steeples can be seen from outside points. A little southward, on a small hill, stands the picturesque old mansion built about a century ago by Gen. Timothy Newell, and now owned and occupied by William Willard, the artist, a native of the town. The house is a noble specimen of early New England architecture; and the place, seen from the meadows to the west, with the arched stone bridge in the fore-ground, and the tops of the buildings just rising above the trees, has an aspect which places it among the finest of American "Old Homesteads."

Sturbridge was originally granted to petitioners from Medfield, when it was called "New Medfield." Its Indian name was Tantasque. It was incorporated as a town, June 24, 1738, and took its name from Stourbridge, in England.

"Henry Fiske, one of the original proprietors, and his brother Daniel, pitched their tent near the top of the hill which has ever since borne their name. They had been at work for some time without knowing which way they must look for their nearest neighbor; or whether, indeed, they had a neighbor nearer than one of the adjacent towns. At length, on a clear afternoon, they heard the sound of an axe far off in a southerly direction, and went in pursuit of it. The individual whose solitary axe they heard had also been attracted by the sound of theirs, and was advancing towards them on the same errand. They came in sight of one another on opposite sides of the Quinnebaug River. By felling two trees into the stream, one from each bank, a bridge was constructed, on which they were able to meet and exchange salutations. The unknown man of the axe was found to be James Denison, one of the proprietors, who, in the absence of a better home had taken lodgings in a cave which is still to be seen not far from Westville. In that lonely den he continued his abode, it is said, till a neighboring wolf, which probably had a prior claim to the premises, signified a wish to take possession; when Mr. Denison peaceably withdrew, and built him a house of his own."— Clark's Hist. Sketch of Sturbridge, 1838.

A soldiers' monument commemorates the 27 men lost by this town in the war of the Rebellion. Daniel Sanders, D.D. (1768-1850), an able clergyman and author; Samuel Bacon (l781-1820), a noted lawyer, editor and clergyman; and Erasmus Darwin Keyes (1811), a major-general of volunteers in the late war, were natives of this town.