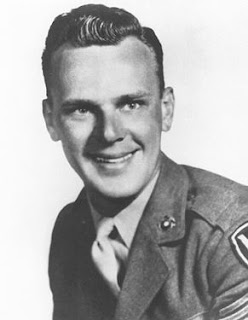 The following story is the first in a series about the people and places in Sturbridge, Massachusetts. This story is one that if you are not familiar with will echo what we have heard about our "Greatest Generation". The character, courage and strength shown by Joseph Julian reflects directly on the place where he was born, and raised, and onto the parents that raised him. Please share this story with others at home, and in the classroom.

We'll never know who we are, or where we are going unless we understand who we were, and where we have been.

Following basic training at Parris Island, South Carolina, he became a Drill Instructor, and, later, was assigned to the 5th Marine Division. He was killed in action on Iwo Jima on 9 March 1945, following a one-man assault on enemy-occupied trenches and fortified positions. The Medal of Honor was awarded him posthumously for heroism above and beyond the call of duty.

The Medal and citation were presented to his parents by the Secretary of the Navy on 15 November 1945. Following the war, Sgt Julian's remains were reinterred at Long Island National Cemetery, Farmingdale, New York, at the request of his parents.

The following is the Medal of Honor Citation.

Citation: For conspicuous gallantry and intrepidity at the risk of his life above and beyond the call of duty as a P/Sgt. serving with the 1st Battalion, 27th Marines, 5th Marine Division, in action against enemy Japanese forces during the seizure of Iwo Jima in the Volcano Islands, 9 March 1945. Determined to force a breakthrough when Japanese troops occupying trenches and fortified positions on the left front laid down a terrific machinegun and mortar barrage in a desperate effort to halt his company's advance, P/Sgt. Julian quickly established his platoon's guns in strategic supporting positions, and then, acting on his ow 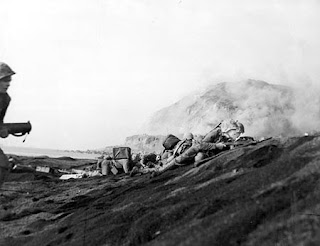 n initiative, fearlessly moved forward to execute a 1-man assault on the nearest pillbox. Advancing alone, he hurled deadly demolition and white phosphorus grenades into the emplacement, killing 2 of the enemy and driving the remaining 5 out into the adjoining trench system. Seizing a discarded rifle, he jumped into the trench and dispatched the 5 before they could make an escape. Intent on wiping out all resistance, he obtained more explosives and, accompanied by another marine, again charged the hostile fortifications and knocked out 2 more cave positions. Immediately thereafter, he launched a bazooka attack unassisted, firing 4 rounds into the 1 remaining pillbox and completely destroying it before he fell, mortally wounded by a vicious burst of enemy fire. Stouthearted and indomitable, P/Sgt. Julian consistently disregarded all personal danger and, by his bold decision, daring tactics, and relentless figh 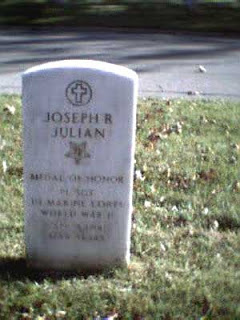 ting spirit during a critical phase of the battle, contributed materially to the continued advance of his company and to the success of his division's operations in the sustained drive toward the conquest of this fiercely defended outpost of the Japanese Empire. His outstanding valor and unfaltering spirit of self-sacrifice throughout the bitter conflict sustained and enhanced the highest traditions of the U.S. Naval Service. He gallantly gave his life for his country.


The above information was gathered at the following sites: