It's Just My Imagination, Running Away With Me... 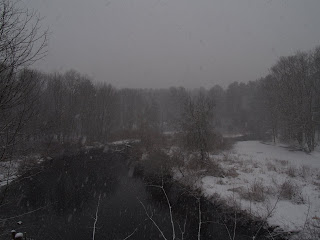 Sometimes I have to find my own form of entertainment.

On New Years Day, we both were home. Usually on one weekend day we go out for a drive. A sort of "Let's Get Lost" kind of expedition. Believe me, you can get lost around here, but it is a pleasant diversion. You will eventually find a familiar road, and then back home again sometime.

Lately, we have not been too good about taking a drive, or taking to the trails. Maybe it's the weather, or other things going on, but we miss it. So, yesterday I said, "Hey, let's take a ride!". I wanted to test out the new Garmin GPS I received for Christmas from Mary. Mary knows I like gadgets, and I had already used it to find my way to work and back home again. I used it to find the Publick House, Old Sturbridge Village, XtraMart, JC Penny's, the intersection of Main and Cedar, Walmart, Westville Lake, the Mass Pike, and my neighbors house. Now, I wanted to take it out on a real test.

No sooner did I mention the word "ride" than the sky started dropping snow. A lot of snow. Before we got our coats on the roads were covered, and the visibility had dropped considerably. Except for the road, which I was watching very closely, we couldn't see much else.

I was thinking that I may need radar instead of a GPS. Maybe next Christmas.

We got in the F-150, turned on the heat to the seats. Heated seats are something that you never knew you actually needed until you have them and your butt actually tells you to turn them on once they know you have them. We pulled out onto Brookfield Road, and headed to Route 20. The road was slick. I put the truck into four wheel drive, down shifted, and prayed I had enough stopping space before I got to Route 20. Four wheel drive does nothing for you when the road is icy, but when the snow is an inch or more deep it does give you stability if you drive a safe speed. Four wheel drive does nothing to improve visibility, though. We had to use our imagination to "see" the sights on our poorly timed explore.

As we turned onto 20 and headed toward Brimfield the road became slicker, and visibility dropped even more. The snow was really coming down now. We crawled to Brimfield, got a bit skittish and turned around at the Hitchcock Academy and headed back to 01518. Once in town again we decided to tempt fate and headed down Old Sturbridge Village Road off Route 20. Now here is a road. Last year the town rebuilt this access road to OSV. They did a fine job. New road bed, new guardrails, landscaping and drainage. A great job and a nice road to take a short drive on in any season.

The snow was coming down harder,and faster, so once we got to the old Route 15 we turned around at Roy Rogers and headed back. Along the way the roads may have been horrible, but the snow was making the landscape beautiful. You know when the snow is sticking to the branches and the top sides of the rocks in the stone walls kind of beautiful.

We stopped on the bridge crossing the Quinebaug River, and took a few pictures, and then drove further down the road to the Thai restaurant parking lot. There we turned around and drove a little bit up the road to a small road on the right. We parked the truck, and headed into the woods along the old road. This road was once the main entrance into Old Sturbridge village back when they first opened. It led over a covered bridge and into the village. Back then you could drive your car in the village. I guess it may have looked a bit strange seeing a 1949 Studebaker circling the Town Common set for 1830.

We walked down the road to old bridge. The snow was coming down, and it clung to the roof of the covered bridge. The water flowing over the dam on our right was loud. We could hear it as we left the truck. The sky was dark gray, the trees were a darker gray, and the river water 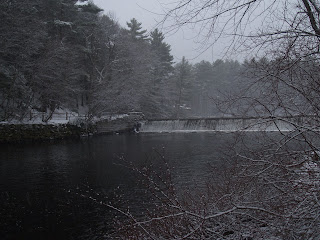 looked black. Everything else around us was white. It was if we were in a photograph from 1949. The only thing missing was that Studebaker.

I took a few photographs, and we did some viewing of the scenery, and then we were ready to head back to the truck. It was cold. Deer tracks mysteriously disappeared when the got to the old road. I imagined that he had lept across the old road. Rabbit tracks flitted off into the woods from the rivers edge.

We got back to the truck, flipped on the heated seats and headed back to Brookfield Road. A small pickup came sliding around the corner from Route 20 and almost wiped out. We held our breath till he regained control.

Once on Route 148 we eased up the hill and back to our home. The GPS worked great, unfortunately it only told us where we were, and how to get someplace else. Not too helpful when the road is hard to see. We may not have a multiplex mega-cinema here in town, or an enormous mall, or ski area, but as long as we have our imagination, we can entertain ourselves. That ride in the storm was a good example.

Never underestimate your imagination. It is the one thing that brings us from here to somewhere else, and if we use it wisely we can go places, and accomplish more than others can with closed minds. And, it's free. Open your heads, let your thoughts free fall in regards to our town and where you would like it to be in a year, five years, or twenty years down the road. Neat, huh? And, if you have a hard time getting it going, go out for a drive to nowhere in the snow.
Scribbled by Wally Hersee on Tuesday, January 01, 2008