OK, Where Are the Laser Guided Street Cars? 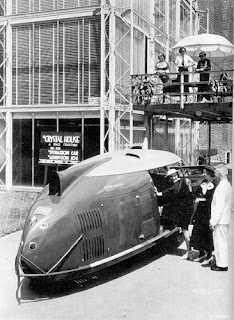 The one thing that struck me as I was reading this 19 year old document was that it could have been written yesterday. It's not so much that it is still current after all these years, but rather just un-done.

"The development of a Master Plan is a process whereby a community seeks to understand where it is today -- its assets and its problems, and where it is going -- the extent of its future needs. It then develops a program which is sufficiently comprehensive to eek solutions for these problems and to provide for future needs through the full utilization of its assets, both human and material, over a period of 10 - 20 years."
--Sturbridge - The Master Plan 1988
I understand that the Master Plan is only a guide, but as a guide, how well have we followed its recommendations? Is it time for a new Master Plan?
I won't bother you with a review of the entire plan, but I will address a few things that struck me as I read through the pages. There will be time enough to address other parts of it in future posts.
In 1988 the population of Sturbridge was 7,600. The plan projected that our towns population would be 9,639 in 1995, and between 13,367 and 14,675 in 2010.
As of the 2000 Census we were only 7,837.
What happened?

Well, what ever it was, it sure saved us a bunch of money, time and energy since the plan was designed for a much higher increase in population. Or, did it? We based our spending on projected tax revenue from growth. Our taxes have gone up in 20 years, but our population only increased by a couple of hundred. Yes, there is always inflation to consider, but this makes one think: Are we taxed more than 1988? If so, are we spending more than 1988? And, if we are, is it because of those 200 new people and how they have stressed our town?
Whoa. Thank goodness we didn't grow to 14,000.
Next let's look at some of the "proposals" on the Master Plan Map 1988. A bike way was proposed along the Quinebaug River. That has happened, to some degree, 19 years later, but not to the extent envisioned in the original map. The original map shows the bike way extending down Route 148 to the river, then along the river to the Westville Dam area. A mighty proposal. We've completed about 5% of that dream. But, as time went on, funds had to be obtained, private property owners encouraged to help out, and a lot of sweat had to go into the project. Still, we are no where near where we should be after almost 20 years. We will be, though.
Another thing the 1988 Map shows is a proposed Route 20 Bypass. A north one, and a southern one. The bypass would detour Main Street in Fiskdale to eliminate traffic there and re-route the traffic along the right of way of the old Grand Trunk Rail Road to the south. There goes the bike way.
The northern bypass was from Arnold St, then west along Cooper, and then further West to Route 148. I'm glad that vision went dim.
A "proposal" on the map was to acquire land between the Grand Trunk Railway and the river for a park. This seems to have been planned around Holland Road, and Route 20. This is something we may still see, but to a much larger extent due to the land purchase in 2007.
The Master Plan also recommended that "properties in Sturbridge be served by safe and adequate water and sewer systems, public, or private."
Nothing new there.
If the public ones aren't adequate, the the private ones have to be. Nothing binding the town to waste water facility expansion. But, we have learned over the past 19 years that our ground water isn't going to take much more private septage, so public septic is the only "safe" alternative for the future. And, that means more capacity.
Hmm. See how things from long ago have a way of visiting us again in a different form?
"Commercial development policies should focus on encouraging those uses and activities which serve and support the shopping and commercial needs of the local residential community, discouraging commercial and shopping facilities (malls, etc.), which are largely designed to draw from a population outside the Town of Sturbridge."
Like Old Sturbridge Village?
But, Hey! Don't folks from out of town use the same currency we do? How about this for a crazy idea? Let's get those "out of town" people, that use the same currency, to come here, to our town, and leave their currency with us? Call me nuts, but that would be so cool. And, we could set up things like stores, and stuff, and sell them things. Then we would have more money, and our stores and stuff would grow, and we would succeed, and , and.... Oh, yeah, the Master Plan isn't really for "outsiders" coming to Dodge.
Anyway, despite the "guidelines" I think we have built a few strip malls since then, and there are more in the works. And, thank goodness, they didn't hold strong to "The Plan", or I'd riding to Auburn every time I needed something from Bath & Body.
A couple of very interesting recommendations were listed on page 27.

"Improve the appearance of Route 20..."
"Expand street shade tree and landscaping to offset intense development in this area...".
"Continue to explore ways in which utilities can be placed underground...".
"Explore increased use of sidewalks as a long-term objective to improve pedestrian safety and mobility.".

Route 20 would look great if they had planted trees along it 20 years ago. It would also look even better if the utility lines were placed underground, and the poles taken out of the sidewalks, too. And, sidewalks. What is it with towns and sidewalks. They are like a poison to be avoided, and not just here. Sidewalks along both sides of Route 131, along Route 20 to New Boston Road, up Route 148, and both sides of Main Street in Fiskdale. Look around next time your are out and about, and look at the number of folks that walk on the street, or up in the grass. Sturbridge is definitely not a "walking town".
Unless, of course, you are in the woods, and then we have trails up the wazoo.
So, what things did go according to plan? There is mention of a possible public park on land on Hillside Street. The plan mentions protecting the OSV land on Route 84 and Leadmine, and encouraging the Trustees of Reservations to obtain the Tantasqua Lead mine. I don't know anything about the land on Hillside, but the town did do well to protect the OSV land. They bought it. And the leadmine land has been a part of the Trustees of Reservations for several years now. There are many other things that have gone well over the years as well.
Reading through the Master Plan 1988 was a good experience. I learned a great deal. I learned about the dreams of a small town, and how many of those dreams were realized, and how others have yet to come true. But, most of all, I see that most of the same concerns from way back then are still with us.
A survey was sent to the residents of the town back in 1988. In it a section was set aside for suggestions. One resident suggested that there be "street cars on every street corner guided by laser beams.".

See? Nothing ever gets done in this town.
Scribbled by Wally Hersee on Monday, January 14, 2008