It's Not the Problems, but How You Solve Them 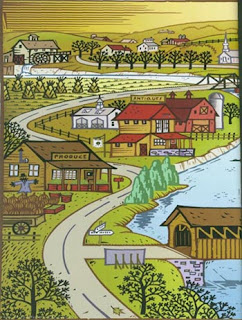 I like to think we are rural. I like rural. Old farms, small country roads. Nothing but beavers, wild turkeys, cows, and horses. But, as much as I am enjoying life here in Rural America, I have a cousin that lives in northwestern Mass that is a whole lot more in the woods than I ever thought of being.

I thought I was living the rural life here in Sturbridge, but just when you think you're there, someone lets you know your not even close.

I' ll share a letter I received from him today.

Been meaning to update you on all the goings on back here, but looks like you will visiting soon enough, so I will just give you the highlights.

All the folks back here have been a bit beside themselves with all the talk about Mad Cow disease over the past few years. You know Dabney Pearsons cow, Shakira, has always had an attitude. She's actually more pissed-off than mad, but that was enough to have Willy and the color guard from the VFW to sneak down last Saturday night and give ol' Shakira a wonderful send off. As a matter of public safety they felt they had to dispatch that moody bovine. Well, it seems the boys didn't have any ammo for their old World War Two rifles, but Willy came to the rescue just as he had on D-Day in '44 by showing up with an old souvenir hand grenade. Soon there was one less Mad Cow, and one 5 foot deep hole in the middle of Dabneys barn floor.

"Hey diddle, diddle...and the cow flew over the moon." The public health was safe once more.

Christmas was real nice up here. Hope yours was wonderful as well. At 3 foot 4 inches, Jackie Gorman was elevated to a new position at the Christmas Festival since Red Palmer was no longer able to play Santa Claus. Red's passing left a very large hole to fill this year. At 532 pounds he certainly did represent the jolly old elf very well till that fatal moped accident. The man on the moped is doing fine, though. Jackie Gorman, on the other hand, knew the role well, having been Santa's Helper for 31 years, and was a natural choice for the replacement Santa. He was a trouper, and his height had very little effect on the festivities. The kids got used to having him sit on their laps real quick.

New Years Eve was so much fun, sorry you missed it, but the videos from Channel 22 News will be available on You Tube for you to see. There were ice sculptures, and music--a real First Night celebration. The fireworks were incredible, but due to the inclement weather around midnight, the Selectman decided to hold them inside the high school gymnasium. A decision that should have been really thought about before the punch was served. Anyway, no one was hurt, and most everyones hearing has returned by now.

The weather has been fairly mild since then, till today. The last 24 hours has seen a drop from 35 degrees to near zero in most parts. Buck Marshalls kid was picked up by the constable for licking a ducks feet and sticking him to the school flag pole. At 7 degrees above zero, that duck stuck there most of the day before one of the lunch ladies pulled him off. Doc Brown, the vet, feels he can fit the little fella with some suitable prosthetic web feet. In the meantime, he falls down a lot, and the best way to hold him upright is to stick him in a tub of Land O' Lakes.

Well, I don't want to give away all the news here in town. I am sure you will be surprised once you come for your visit.

So, next time you think we have issues here in our small town, sit back and think of Ephraim up there in Northwestern Mass. It's not so much the problems, but how you plan to solve them.